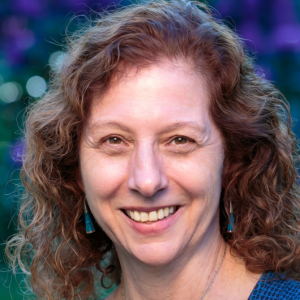 Debra Corea is a Lecturer in Mind-Body Somatics at the University of Rochester where she has developed undergraduate courses dedicated to bringing curiosity and awareness to the nature of mind along with the experience of residing in a human body (Embodied Resourcing Through Somatic Practices, Into the Present Moment, and Living Anatomy, Living Yoga). She teaches Koru Mindfulness through UR’s Mindful University Project, is an authorized Continuum Movement® teacher, and is on the faculty of Open Sky Yoga Therapy Training. Introduced to yoga and meditation in 1973, Debra began to deepen her engagement at Open Sky Yoga in 1990. Through exposure to Deborah Raoult’s teaching of prenatal yoga, Body-Mind Centering® and Continuum Movement®, she became enamored by somatic exploration, going on to study with visionary Emilie Conrad. As a student of François Raoult, Debra has been immersed in many dimensions of yoga, completing several yoga teacher trainings (ETT, Pranayama, Advanced Relax and Renew®, Yoga for Scoliosis at Open Sky; YTT, Insight Yoga, Integrative Restorative (iRest) Yoga Nidra at Kripalu). Debra received her 500 RYT upon graduating from Spirit Rock’s Mindfulness Yoga and Meditation Training in 2013. One of Debra’s greatest pleasures was to accompany Thich Nhat Hahn, her most influential mindfulness teacher, on a pilgrimage in the footsteps of the Buddha in northern India.